You have no items in your cart

Note: these are high quality, each one with nice spark.

These towers are gorgeous, even better in person. High quality, perfect combination....highly suggest

I love sunstone and moonstone together. So lovely and the feminine and masculine energy is amazing.

These towers were even better than I thought they would be. Sold many of them right away! I received a total of 11, most of which were between 3 and 4 inches. More than half of them had some of the best high quality flash I have seen with moonstone. Some had some sandstone flash mixed in as well which looks so pretty. Most of them you were able to see the flash just with them sitting on the shelf without having to search for it. Amazing!! 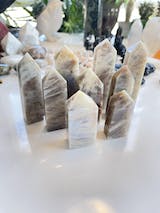